One of our projects this autumn is to develop our cut flower growing in the kitchen garden. 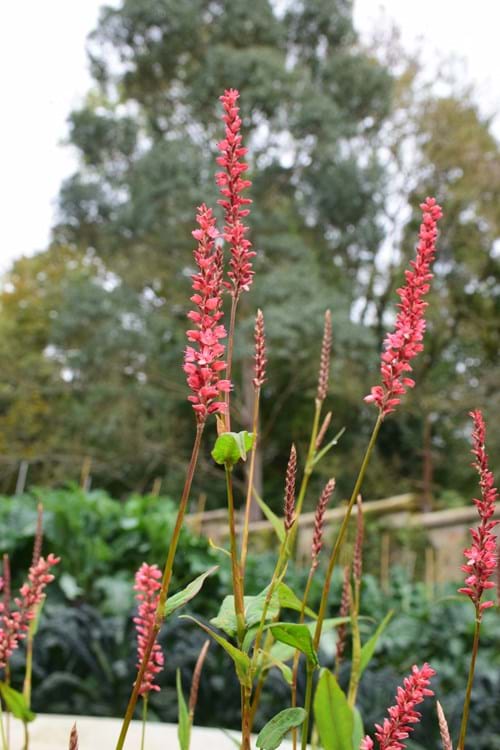 Cut flowers are one of the most important crops we grow and every morning Head Florist Sue and her team crop from the garden for the manor’s displays. Good quality cut flowers are a high value crop and a really productive way to use the ground. Growing our own also allows us to produce the same flowers seen in the Flower Garden, so that Sue’s arrangements link with the plants grown outside. We can also grow flowers which link with the artwork in the hotel and this is particularly exciting with the interior of the new restaurant. In this room Sue has really enjoyed using lavender and apricot tones in her arrangements to emphasise some of the details used in Claire Basler’s work. Lemon yellows and acid green has also been useful and it’s been a lot of fun finding new plants to crop to meet demand for this new space.

Before we plan what we are going to grow we always get Sue to trial plants first. Salvias have become a staple in the flower garden, but sadly we couldn’t get them to last in the vase; the same being true of the poppies, which work so well in our borders but just can’t perform as a cut flower. Fox gloves on the other hand have been excellent in the past and this year we have sown extra ‘Pams Choice’ and ‘Suttons Apricot’, which should be magnificent in some of the larger vases.

Annuals, such as Cosmos, Tagetes and cornflowers have always been useful in this kind of production and bulbs like tulips are really important for the spring. But we are particularly interested in finding perennials, which will come back year after year and give us a really long season of cutting. Verbena is one such candidate, which has worked well in Sue’s trials. V. bonariensis is the obvious choice, but the danger of this is that it seeds so freely it could become a major weed in the kitchen garden. V. hastata is also lovely but is also quite promiscuous and has a rather short season. Verbena x macdougalii ‘Lavender spires’, however has proved to be perfect for our purposes. Being self-sterile this plant will not seed itself and has a really long season from July into November. Its delicate lavender spikes worked really well in the vase and with such a long cutting season I am hoping it should be a success for next year.

Growing plants for cut flowers is also a good way of having a look at how new plants perform, before selecting them for the borders. Some time ago I was given a selection of Persicaria to try by a breeder from Belgium called Chris Geslan, which we lined out in the Kitchen garden. This is the first year they have flowered and all 15 plants are quite distinctly beautiful. ‘Black field’ stands out as a strong stocky plant with a deep red wine colour and ‘Fat Domino’ is similar only bigger and more upright. Pink Elephant is one of my favourites, which we have used so much in the long border. But best of all for restaurant cut flowers ‘Orange field’, (which is actually a really interesting coral pink) and ‘Pink mist’ look most promising. Lining these plants out in rows for cutting gives us a chance to grow them on, so they can bulk up in size. When they are big enough, so long as they have worked well, we will divide them up and plant them in the borders near the restaurant, linking garden, flower arrangements and art work.